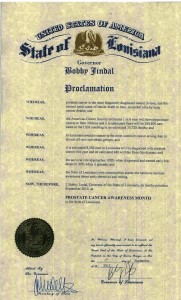 It’s OFFICIAL!  Louisiana Governor Bobby Jindal, thanks to the efforts of the riders in PCAP’s Pony Express and  your vehicle donation, has declared September, 2012 to be Prostate Cancer Awareness Month in the State of Louisiana.

Highlights of the Proclamation include:

• “in Louisiana Prostate Cancer is the most common cancer among men…”

•  “it is estimated 8,360 men in Louisiana will be diagnosed with prostate cancer this year and an estimated 480 will die from this disease…”

•  “the State of Louisiana joins communities across the country to increase awareness about early detection and testing.”

You really don’t have a choice – the Governor said it is Awareness Month, you know.

And, yes, we accept vehicle donations in Louisiana, and every other state as well.