Today, February 29th is a day that usually only occurs every 4 years.  It’s a day added to our calender because the Earth fails to orbit around the Sun in exactly 365 days as our calender assumes, it actually takes – 365 days, 5 hours, 48 minutes and 46 seconds.

If this adjustment was not made to the calender for the extra six hours by adding an extra day approximately every four years, the calendar would slowly shift and the seasons would no longer be aligned with the traditional months. 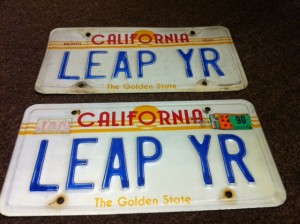 Now imagine being born on a Leap Day (February 29th).  Your chances are 1 in 1,461.  Well this just so happens to be the birth date of one of our donors who donated a car to us last year.  She’s an elderly person who no longer drives and decided to donate an older Oldsmobile.  The car was non-running and in pretty bad shape from sitting around for so many years.  We ultimately sold the car to a recycling facility but couldn’t help notice its unique personal plates.  So before sending this car donation off to the recycling center we decided to retain the plates.

This entry was posted in General News. Bookmark the permalink.