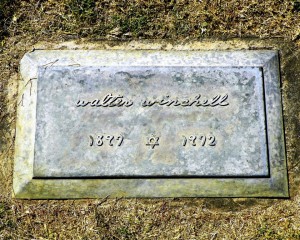 Walter Winchell was a radio commentator, columnist and a star. Controversial and abrasive, but highly successful, he was a pioneer in the fight against the Nazis and the Communists.

His Greatest Success was Elsewhere

Today we commemorate the 4oth anniversary of Mr. Winchell’s death from prostate cancer.

He covered the Lindbergh kidnapping, was a friend of J. Edgar Hoover, reached 50 million readers every day through his newspaper column.  Everyone, whether they liked him or not, knew who he was.

But, in 1946, his close friend Damon Runyon died of cancer.  Walter Winchell’s reaction to his loss was a life-changing decision to found a cancer research foundation in his friend’s name.  It continues to this day.

Yes, it is ironic that Mr. Winchell, 26 years later, died of prostate cancer at age 74.  But it is not really surprising since no cancer kills more men, now up to 34,000 per year.

Please consider your own life:

You’re world famous – or you’re not

You’re the best at your business – or you’re not

You’re always at the forefront of battling international evil – or you’re not.

Regardless of your level of success in business or relationships, have you considered your legacy? Forty years after you’re gone, for what will you be remembered?  You may not see it as a big deal, but when you make a car donation, you may start a chain reaction.

Consider – you donate a car, boat, RV, motorhome, truck, anything with a motor, in Pennsylvania.  We publicize your generosity (not by name) and someone in New York follows your example, then another in Oregon, then in California, then in New Mexico.

Lots of money is raised, lots and lots of publicity is published, thousands or hundreds of thousands of men react by becoming attentive to their prostate health.

Tax bills shrink and Lives Are Saved.  Cancers are caught before they metastasize.  And you did it.